In season 90-91 I was a referee on the then Great Mills sponsored Western League and one of the duties in those days was that the FA asked the Western league to appoint 4th officials. I was asked to carry out these duties at Bristol Rovers, Plymouth Argyle and Torquay United in that year. The role was an honour as you could imagine meeting league players and managers and visiting professional grounds. I was at Twerton Park with Rovers playing Wolves with Steve Bull, at Plymouth where Peter Shilton was manager and at Torquay where one game will always be in my memory.

I got the call to be 4th official from Cliff Ashton ( Western League Ref Appointment Sec) as I had closed my fixtures for that weekend with the league as I was visiting friends and family in Plymouth. Cliff rang me and asked if, as I was in the South West that weekend, if I’d like to earn £25 and be 4th official at Torquay who were playing Wycombe Wanderers were Martin O’Neil was their manager. As an added bonus, Roger Milford would be the referee. You’ll remember Roger from the FA Cup final when he was expected to have sent Gazza off only to see him carried off!

I arrived at Torquay’s Plainmoor ground in good time and was escorted to the Chairman’s suite where I found Roger making the tea for everyone and of course, being the centre of attention.

Pre-match we walked the pitch and Roger explained what they would be doing and what he expected me to do as 4th Official. It was basically to look after spare balls, flags, keep a record of what happened on the pitch but the main task was to keep Martin O’Neil in the dugout or as Roger called it, the chicken coop! This was not an easy task and one that would give me grief all game as you will remember how boisterous he was on the touchline in those days.

All was going well until about 3 minutes to half time when the Torquay centre half brought down a Wycombe forward in the penalty area. The crowd went loopy when Roger waved play on!! Martin O’Neil was fuming, running up and down the line ( no technical area in those days) swearing and calling Roger some unrepeatable names!
You will remember my main task was to keep O’Neil from ‘going over the top’ well, as Roger blew for half time, I bent down to pick up equipment, when Martin O’Neil came out of the chicken coop like a greyhound and headed straight for Roger. Oh my god. I thought I’m going to get an ear-ache when we get into the changing rooms. O’Neil reached Roger as he was leaving the pitch and I could see the finger wagging going on and a heated exchange.

But, by the time they had reached the tunnel to go into the changing rooms, Martin O’Neil and Roger were roaring with laughter! What had Roger said to him to calm the situation down? O’Neil was a raving lunatic one minute and here he was laughing with Roger.

Roger visits Keynsham Town FC on a regular basis and to this day, will not tell me what he said to calm the situation down. Roger had a reputation for being a fair if not spectacular referee but what he excelled in was being a MAN MANAGER. Great times. 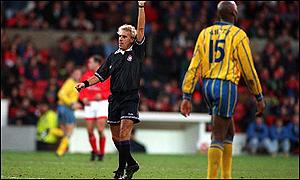 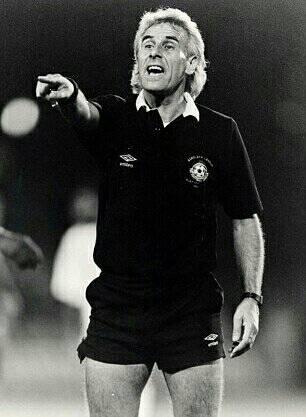