The match was preceded by two minutes’ silence to mark the passing of long-time club stalwarts Terry Hazell and Bob Burns.  A silence which was impeccably observed by the crowd of 163 as befitted the mark of respect they held for these two men.

Exmouth Town came to the AJN Stadium having lost only of their seven previous matches on their return to the Western League.  They looked the brighter team in the first half too having shots and crosses cleared off the line three times by a resolute Keynsham defence.  Additionally, in the 8th minute Adam Bilcock hit the post for the visitors with a free kick from just outside the box.

Keynsham came more into the game in the second period of the first-half, Sam Downes having the best effort from 30 yards out, which just skimmed past the right-hand post.  In the end the home side took the lead just before half-time when a long ball from Craig Wilson beat the entire Exmouth defence and found an advancing Ben Harris who beat the custodian Chris Wright to the ball and slotted it home.

In the second period Exmouth applied even more pressure on the home defence.  A poor back pass gave Exmouth an excellent chance to equalise but home goalkeeper Ash Clark made a brilliant save to keep his side’s lead.  Ace High put a dangerous cross over from the right but none of the advancing Exmouth players could apply the finishing touch and late into the match the same player had a header well saved by Clark.

In the end it was the old adage that you cannot win matches if you don’t take your chances.  On the balance of play Exmouth should have had a comfortable victory but Keynsham’s defence, with Mike Grist and Ade Harvey outstanding, was well organised and held firm. 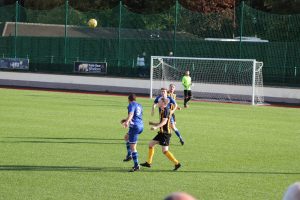