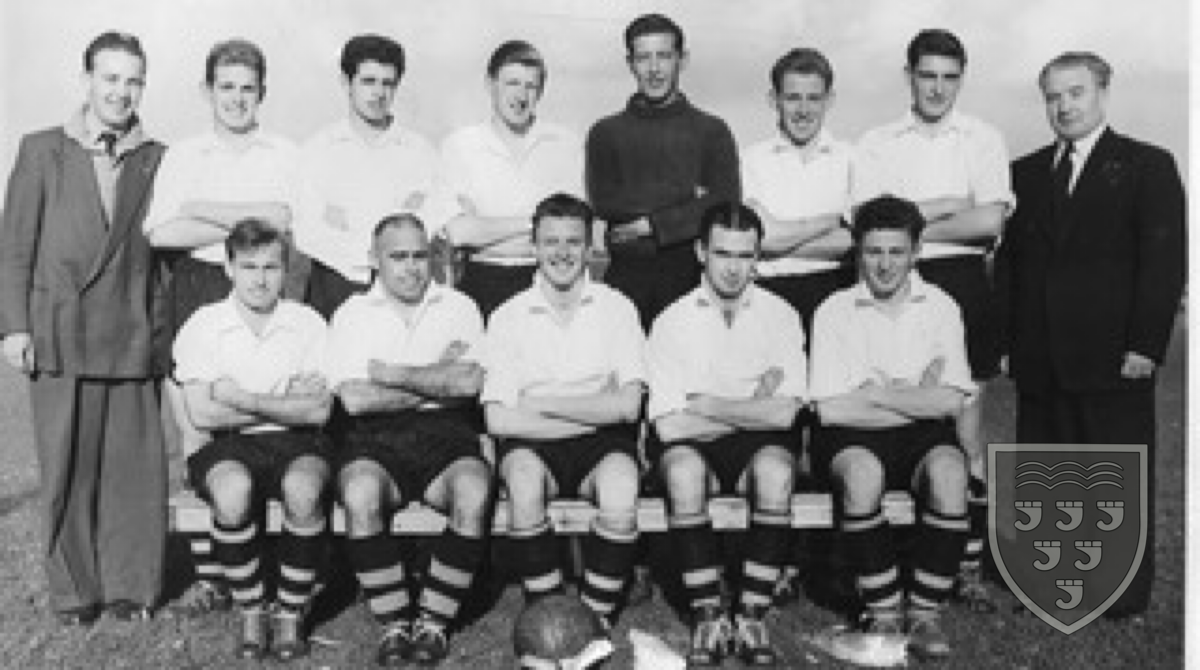 The early years of football in Keynsham have been documented elsewhere, but it is worth noting that during the latter part of the 19th and the early 20th century several teams were playing.  Among them were Albert Road Villa, West End Rovers and church teams such as Keynsham St John’s and Keynsham Victoria (Methodist).   West End Rovers were still playing in 1910 but it appears that Keynsham Town was established in 1895.  A report in the Bristol Mercury of 26 September 1898 states “The Keynsham Football Club on Saturday played their first league match at Keynsham…” and by 1906 Keynsham AFC were competing in Division 1 of the Bristol & District League, in which they remained until relegated during the 1930s.

Various pitches provided a home in these early years, though some details are now a little unclear.  First was “The Hams” the area down towards the river much later occupied by Cabury’s until 1910, followed by the Gastons, a field alongside the railway in Avon Mill Road, on Bath Road, then in 1925 Park Road for 5 seasons, where they remained until a move to Charlton Road, just past the junction of St LadocRoad, in 1930.  There was also a spell at Manor Road playing fields where the team had to change in a cowshed, where the Rockhill Caravan site is now situated.

The club was disbanded for the period of the Second World War, reforming in 1945 and playing at the Crown Fields from 1947.  The Club owe a great deal of thanks to the foresight of the then Committee spearheaded by Roy Neal and Ken Dowling for purchasing the land at this time.

On the pitch their fortunes improved and they took the Division Two title in 1949–50, so earning promotion back to Division One. The Club won the Somerset Senior Cup in 1951–52, and again in 1957–58.   In the late 1950s the club joined the Bristol Premier Combination, before moving up to the Somerset County League in 1967.

A new clubhouse was built in the 1970s, followed by new dressing rooms in 1984; floodlights were erected in 1989 with their opening celebrated by playing Chelsea with Peter Bonetti leading their team.  Later, the clubhouse was upgraded and seating added in the covered stand.  The current President Malcolm Trainer, was born very close to the ground and has many memories from his home club. He states that football at the club has been a rollercoaster ride with many sojourns to the Premier Western League over the years. Great characters like Ronnie Dicks, Barry Dundridge, Terry Hazel and much missed Terry Hooper.

Off the field the club known as the Canaries, but now simple as the Ks, have been fortunate in having a whole raft of volunteers behind the scenes. People like Roy Neal, Ken Dowling, Lester Clements, Mike Lambourn, Geoff Cox, Jean and Allan Skuse, Phil and Heather Gane, Steve Nicholls, Martin and Lynda Coles. The Club has also been fortunate to have some great managers like Roger Stone, Graham Bird, Nigel Lee, Paul Hirons, John Ellener, and Chris Selway. Ian Anderson was a tremendous asset as Club Secretary but sadly passed away after retiring and returning home to Scotland.

The present times see Keynsham Town FC in good health. In 2011 following Trustees securing a partnership with Brea-Avalon, the stadium was renamed “The AJN Stadium” in memory of Barrie Newton’s ( MD Brea Avalon) son Alex who died tragically from Muscular Dystrophy. Over £1m was invested in the facility along with significant grants secured by the football club from the Football Foundation and the facility now boasts one of the best sporting facilities in the south west, with a fabulous modern artificial surface.

Keynsham Town Football Club would like to extend a warm welcome to our visitors, their club officials, traveling supporters and match officials. “Good behaviour makes for a good game”